Hydrolic oil fire: Inside the realm of hot work, hydraulics, recovery at Tyson 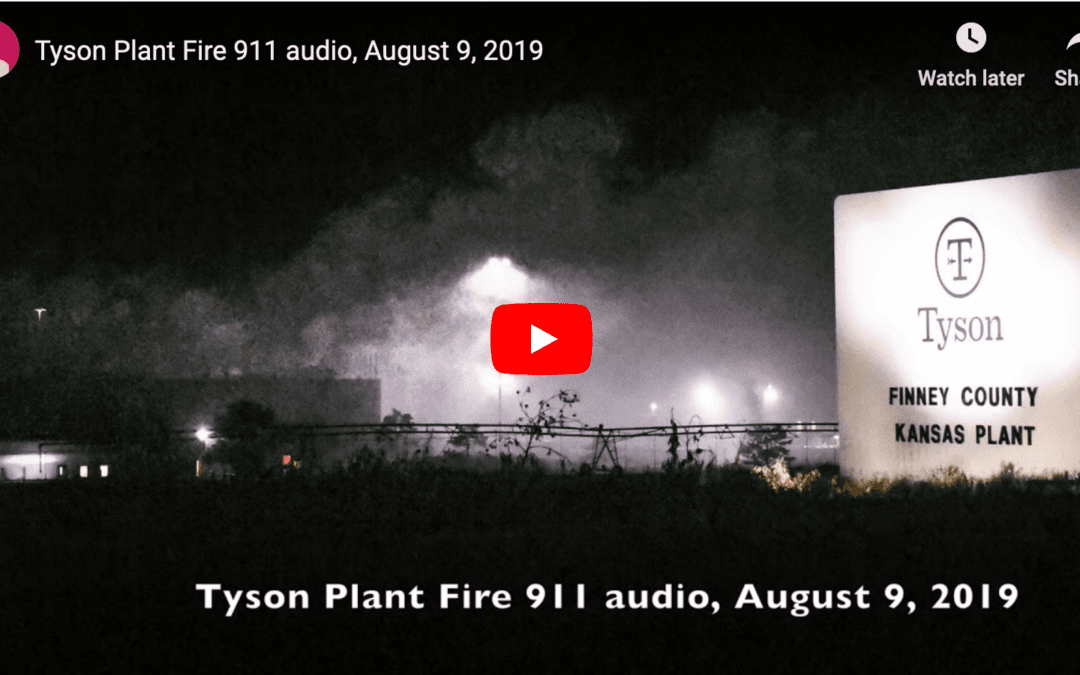 Five weeks after the smoke thinned from a hydraulic oil fire that knocked out operations at the Tyson cattle processing plant near Holcomb, the details of a mysterious flash that ignited the blaze remain hazy.

The reconstruction process is underway, a company spokeswoman said this week, but the plant won’t resume full production until next year.

Fire codes, 911 audio obtained through an open records request, and insight from a safety specialist help illuminate a narrative loosely outlined by Tyson officials in the days after the Aug. 9 fire. Tyson’s president said the fire began with a “flash of some sort” following welding work in a shop by the plant’s slaughter area.

The urgency is evident in the voice of an operations manager who placed the 911 call to report the fire.

“I’ve got a hydraulic fire — oil fire — on the harvest side,” he said.

“We’ve got oil on fire,” the manager said.

Although fast-moving emergency crews contained the fire to a single room, the soot-soaked plant sustained heavy damage. In addition to repairing a 40-by-70-foot hole in the roof, crews were tasked with a massive cleanup and the replacement of electrical components.

Industry insiders estimated the plant was responsible for roughly 6% of all the beef processed in the United States. The outage sent cattle futures tumbling toward loss limits as other facilities scrambled to expand production and ranchers considered distant options for harvesting their herds.

“We’re continuing to assess the damage and are beginning to reconstruct our facility,” said Liz Croston, a communications manager for Tyson. “As initially shared, it will be months, not weeks, before we are fully operational, and we expect to resume business as usual after the calendar year.”

Croston didn’t respond to multiple inquiries seeking information about the cause of the fire and the company’s permit process for “hot work,” as welding is classified in regulatory jargon. Other unanswered questions include whether the work was performed by Tyson staff or a contractor, and whether the individuals assigned to the fire watch received training for the duty.

Greg Jakubowski, a fire protection engineer with decades of experience evaluating precautions for industrial facilities, said the biggest question now facing Tyson is what the company plans to do to minimize the risk of another emergency.

Jakubowski is an owner of Pennsylvania-based Fire Planning Associates and formerly worked for the pharmaceutical giant Merck and FM Global insurance.

Hydraulics are used in conveyor systems and equipment commonly found in factories, he said, and there are specific steps that should be taken when performing hot work.

“If you’re going to do hot work, you want to make sure there’s nothing in the area that could spread the fire,” he said. “Hot work is done all the time safely, all over the place, all over the country. But it also has resulted in some major, major fires.”

An example would be the deadly 1991 fire at a Hamlet chicken processing plant in North Carolina, which Jakubowski said was a watershed event for fire protection. That fire, which killed 25 workers and injured 55 others, resulted from a failed hydraulic line.

No one was injured in the Tyson fire, and OSHA confirmed it is not investigating.

Fire codes call for only trained personnel to perform hot work. The work should be a safe distance from combustibles, or the combustibles should be shielded. Trained fire watch employees should be prepared with fire extinguishing equipment during and after the work, according to code.

The company would have issued a permit for the job that outlines the procedures to be followed.

For hydraulic fluid, the typical flash point — the temperature at which an oil’s vapors become flammable — might be 300 to 400 degrees for hydraulic oil. That means it won’t catch fire under normal conditions. By comparison, the flash point for gasoline is negative 45 degrees.

Hydraulic oil’s ability to ignite changes dramatically when under pressure. An OSHA report issued shortly before the 1991 chicken plant fire warns that a fine mist of leaking oil is easily ignited.

“When the mist reaches an ignition source, the result can be a torch-like ball of fire,” the report said. “If the oil mist is confined, a violent explosion can occur.”

Jakubowski said a hydraulic line malfunction can happen suddenly and without warning. The resulting fire would be hot, smoky and difficult to control.

“Everyone got out and there are no injuries,” Jakubowski said. “Equipment can be replaced and lives can’t, and that shouldn’t be forgotten.”

After a fire like this, he said, the company will work with engineers, maintenance and insurance as it assesses the damage, determines the cause and prepares to rebuild. Because the plant’s operations involve food processing, Jakubowski said, federal authorities may require extensive cleaning that could take months of work. Any equipment that touches food may need to be replaced.

During an onsite visit the week after the fire, Tyson president Steve Stouffer said the company would look for opportunities to improve safety when it brings the plant back online.

“The hope is it’s better than what it was, right?” Stouffer said. “We’ve got a basket full of lemons right now. What can we do to make lemonade out of this? Can we make it a better place, a better process, a better system? We have the damage. We have to work through it.”